Drax is a village and civil parish in the Selby district of North Yorkshire, England, about 6 miles (10 km) south-east of Selby, best known today as the site of Drax power station. The village has a Community Primary School and a public house, the Huntsmans Arms. It formerly had another pub, The Star, two village shops, a butchers, petrol station and sub-post office. The butchers shop was closed and converted into a private home, then converted back into a village shop, and closed down again in January 2007. The original post-office and village shop was opposite the parish church and closed in 1998. The Star closed in 1986 when the licensee took the licence of the newly built Sports and Social Club of the Power Station.  (Courtesy of Wikipedia)

FROM THE SOUTH and WEST

You have a choice of remaining on the A1 and turning east towards Hull when you reach the M62 and then following the directions above.

If you are relying on a SatNav it may well take you across the A64 east towards York and then south down the A19 towards Selby and around the bypass and onto the Bawtry road to Camblesforth where you should turn left to Drax.

FROM LINCOLNSHIRE and EAST ANGLIA

You have a choice of A1, M1, M18 or M180 to get you onto the M62 and then once more follow the instructions from junction 36. A SatNav may try to take you over the Humber Bridge as being slightly shorter in distance but it is only about 5 miles so it is NOT worth the toll!

The postcode / input YO8 8 Drax appears to work satisfactorily with most SatNavs.

This map shows the immediate road layout at the club. 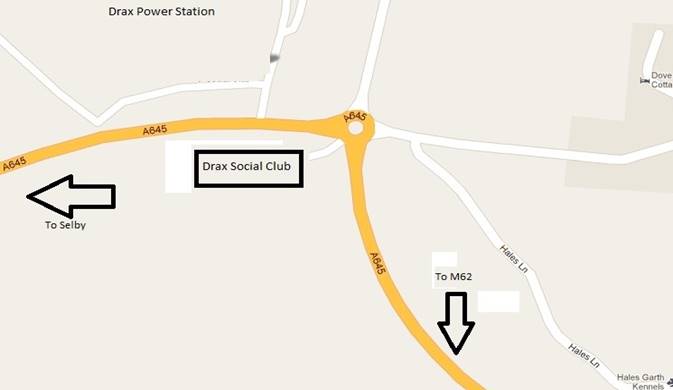